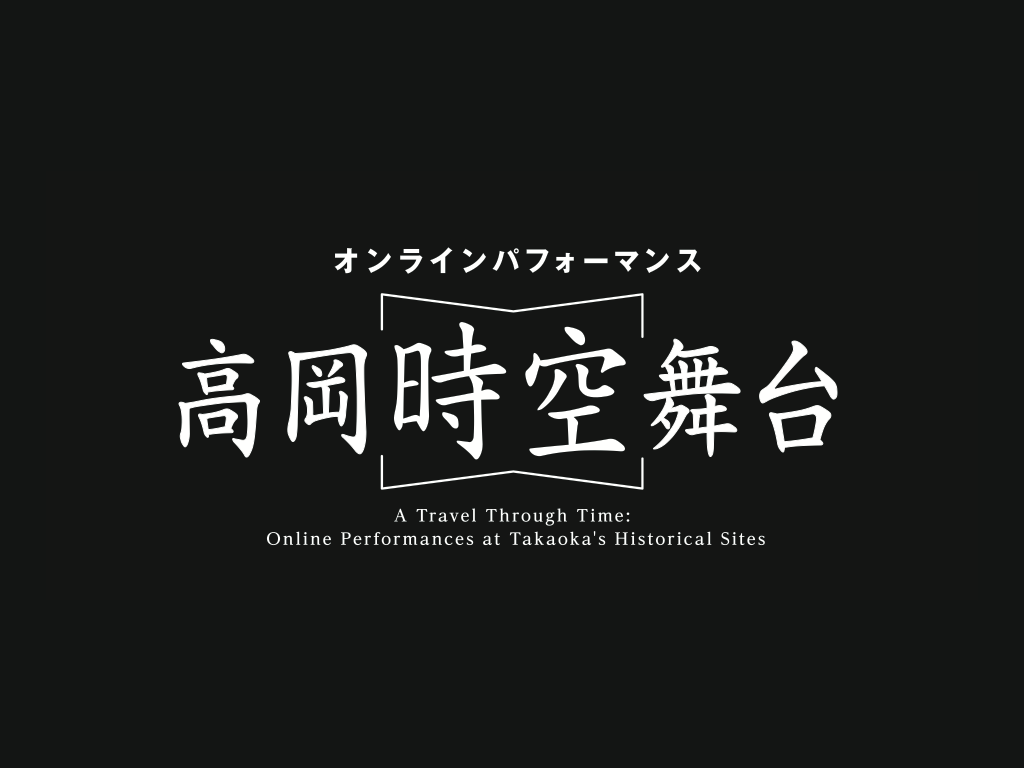 “Travel through Time Performances at Takaoka”, an online performance video showing traditional cultural arts, music, and dance by local artists is now distributed on the Takaoka Cultural Creativity City Official Channel on YouTube with historical cultural assets and the city scape of Takaoka as a new place for the stage.

Fusion of history and culture make up an elegant stage and all the works are impressive!

This time, we introduce the three works.

1.  Dancing in the Moonlight of Shōkōji Temple

Shōkōji Temple is familiar as “furukohan” in the Fushiki district of Takaoka City.  In March, 2021 after finishing the “major Heisei repairs” which lasted for 23 years, a magnificent appearance just as in the Edo Period was revived.

In this video, having the historical Shōkōji Temple as the stage, gorgeous ballet by the Kasai Dancing Company and beautiful tone of Koto by Ikutaryuseigensha Katakagokai color the Shōkōji Temple at night.

The Shōkōji Temple was supported and continuously guarded by so many people over the ages from the Edo Period to the present.  Then, the dancing and the music polishing expression by carefully passing on as well as adding new charm.  One is charmed by a stage only existing in Takaoka where the history and culture are fused. 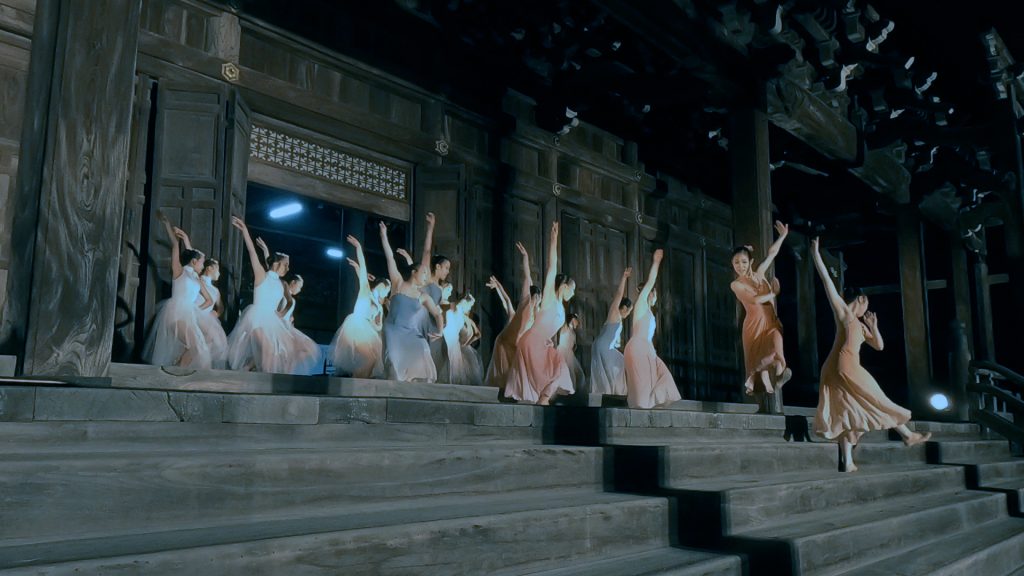 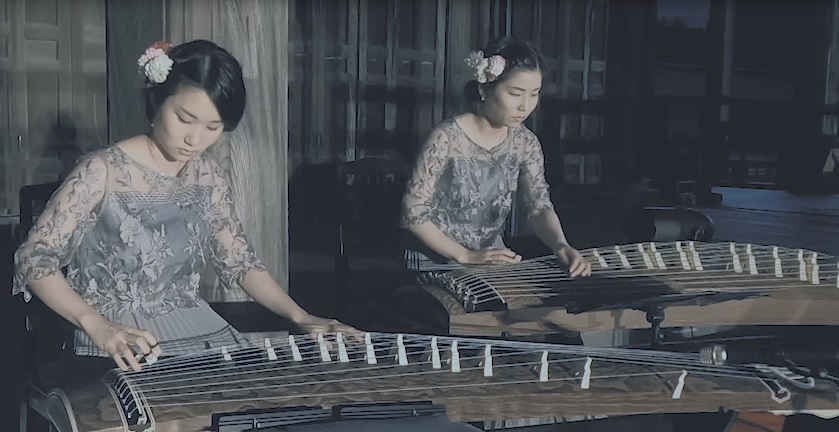 Kanayamachi specified as Important Preservation District for Traditional Buildings as historical streetscape where appearance remains from the time of founding of the town.  Yamachosuji and Yoshihisa have also been specified the same in the city of Takaoka. There are only four cities including ours in all of Japan having three Important Preservation District for Traditional Buildings.

Kanayamachi, the stage of the video is the birthplace of Takaoka metal casting where Toshinaga Maeda, who founded the town of Takaoka invited seven metal castors for starting an industry and had them live there.  The contrast between the latticed windows called “samanoko” and stone pavement is beautiful and many tourists pay a visit from all over Japan. 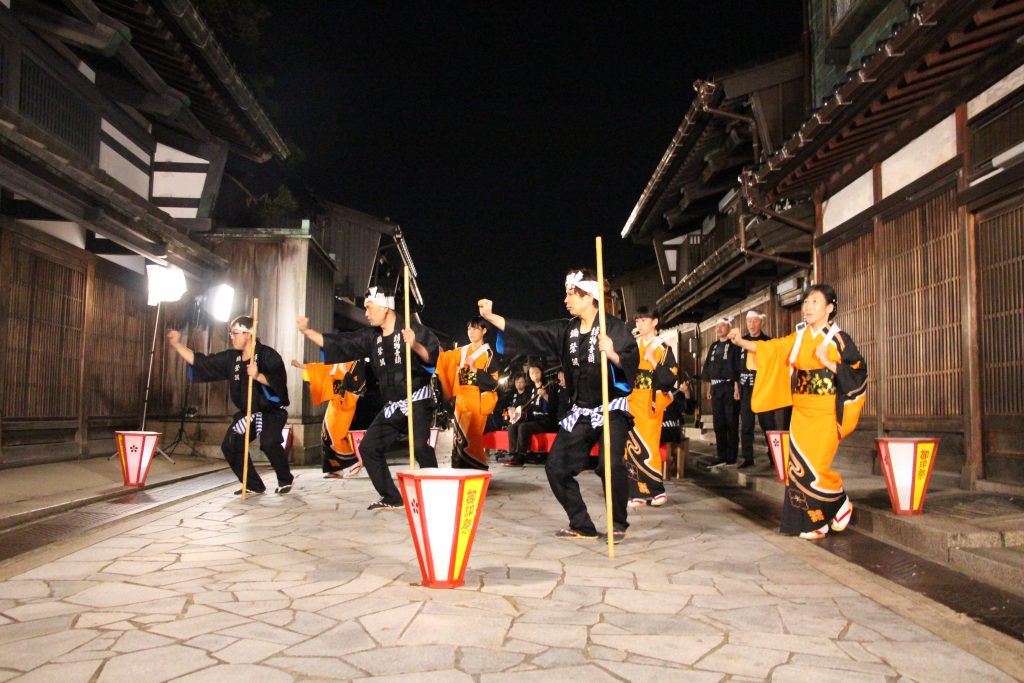 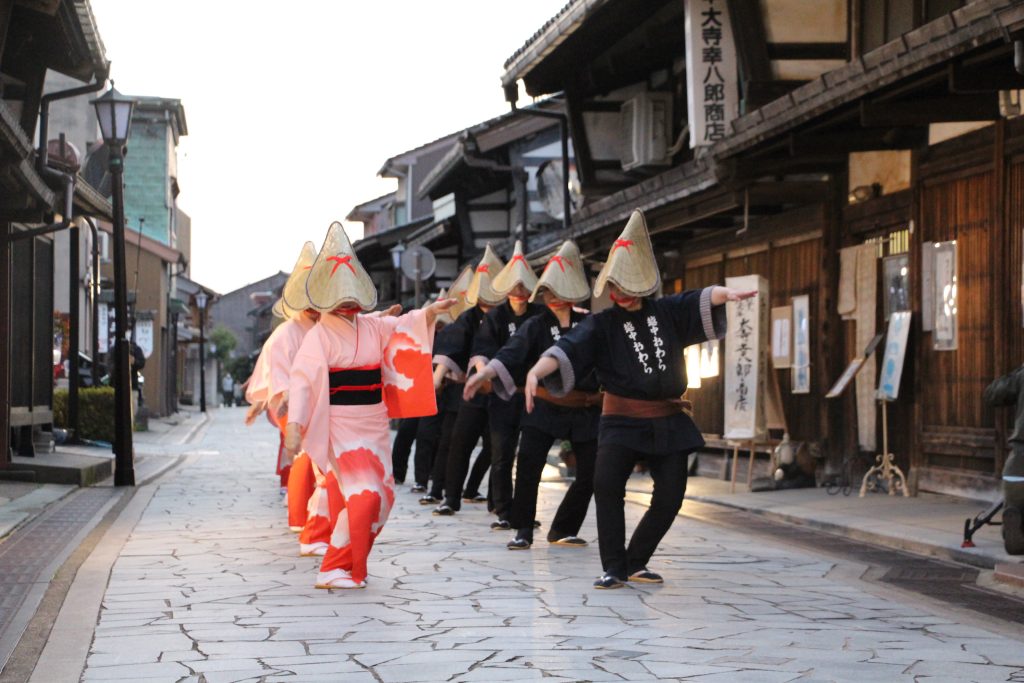 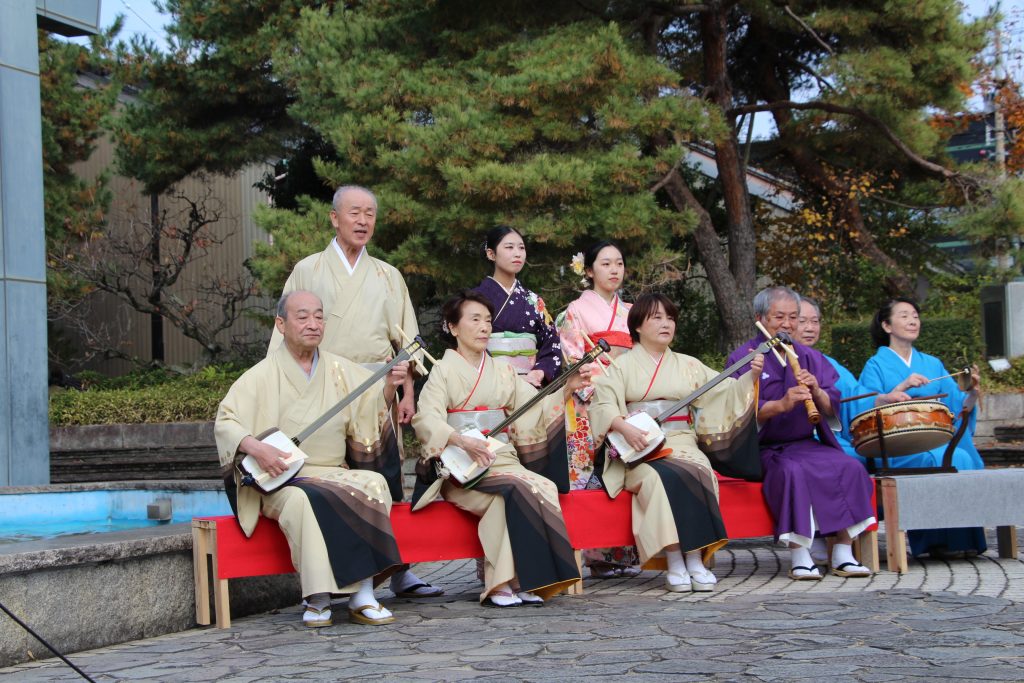 The first stage for the video is the National Park, Amaharashi Coast.  Many people visit it as land of superb view looking at the 3,000m level Tateyama Mountain range over the sea.  In the Nara era, Yakamochi Ootomo who was moved by this grand scenery wrote many waka poetries and later it was specified as the country’s scenic spot as a scene appearing in “The Narrow Road to the Deep North” by Basho Matsuo.  At the beautiful Amaharashi Coast which has charmed people’s hearts from the days of the old, and the students of the National Institute of Technology, Toyama College Imizu Campus Japanse Dance Club will dance the three tunes of “Kikuzukushi”, “Hanetsuki” “Madame Butterfly of Nagasaki”.  It is a beautiful stage of Japanese Dance colored brightly by kimono and props.

The second stage for the video is a national treasure Soto School shrine of Zuiryuji.  It is the Soto School shrine known as the family temple of Toshinaga Maeda, the founder of Takaoka.  It has been built by Toshitsune, the third prince over approximately 20 years of time.  Beginning with the Buddhist temple, the lecture hall, and the main gate are specified as national treasures being masterpieces of modern Buddhist temple architecture.

With the historical Zuiryuji Temle as the stage, Hanakawaryu Kiku Hanakawa dances the Japanese dance of “Shima no Senzai”.  Please view the refined, soft, and beautiful movements in the majestic atmosphere. 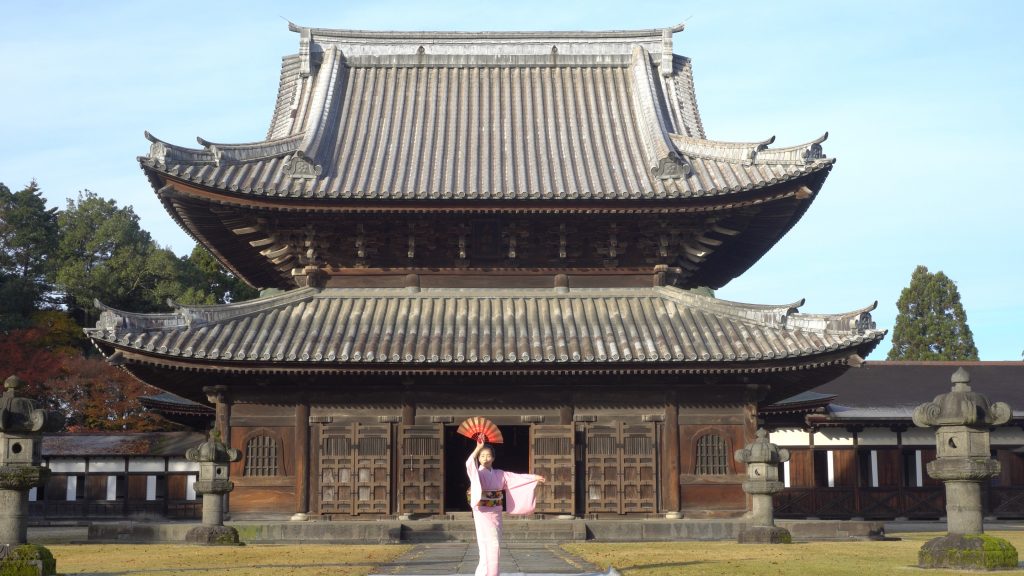 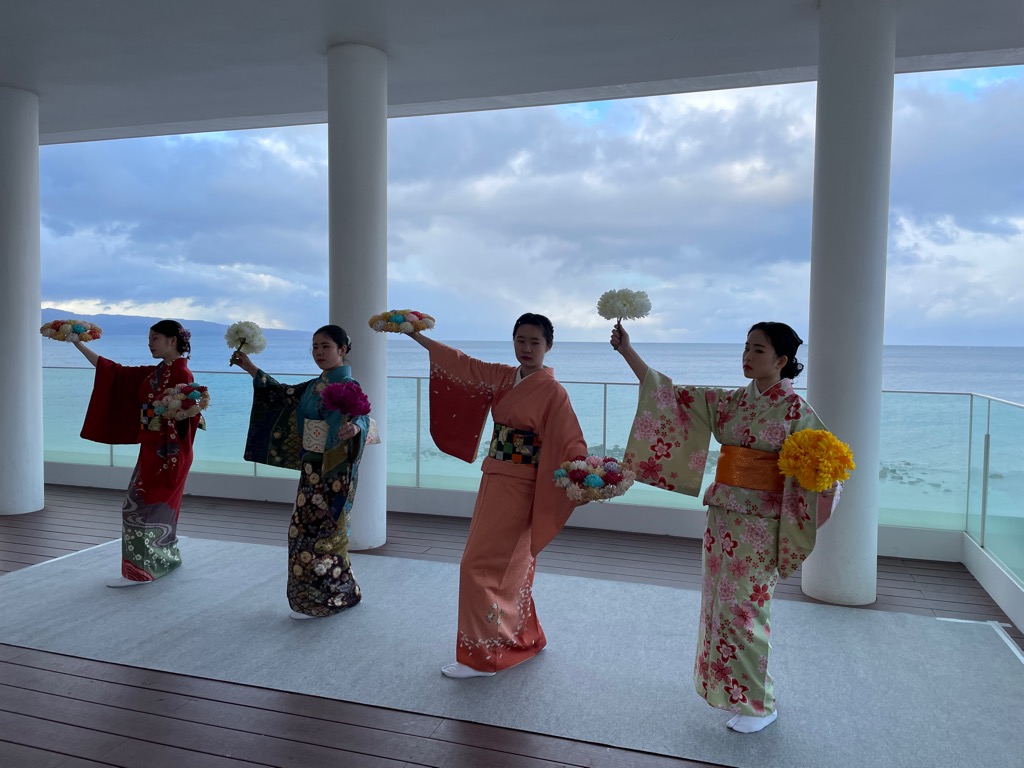 In all the vides, one can discover a new attraction by having the thing to see in historical assets and culture of Takaoka City mix together.

You can view the approximately 30 minutes original version and a four minutes digest version on the Official Channel of Takaoka a Culture Creating City on YouTube.

Please enjoy the works which are quite different from performances and music you usually enjoy in halls whenever and wherever you please.