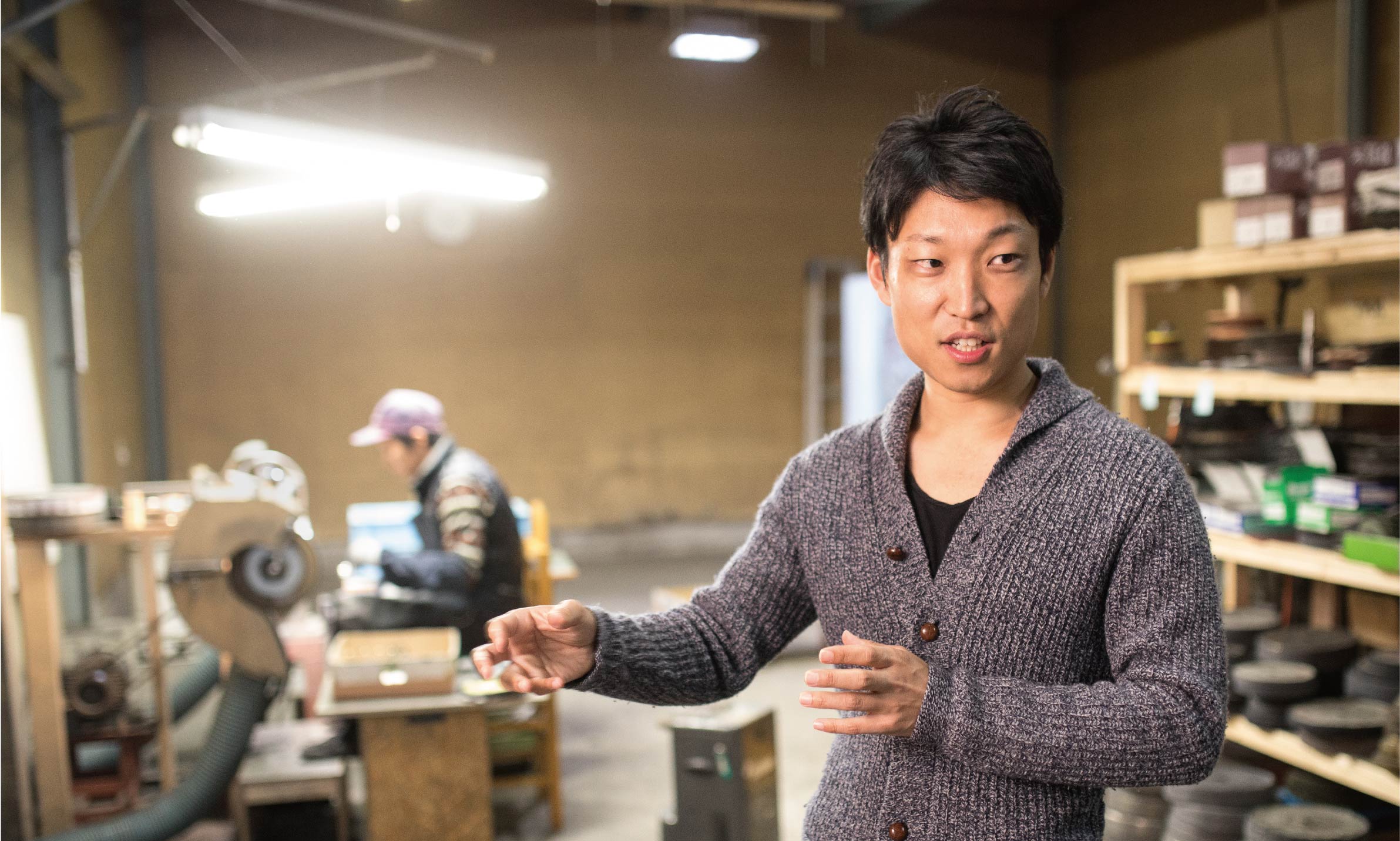 I want to convey the traditions and charms of the region through the people that live here. 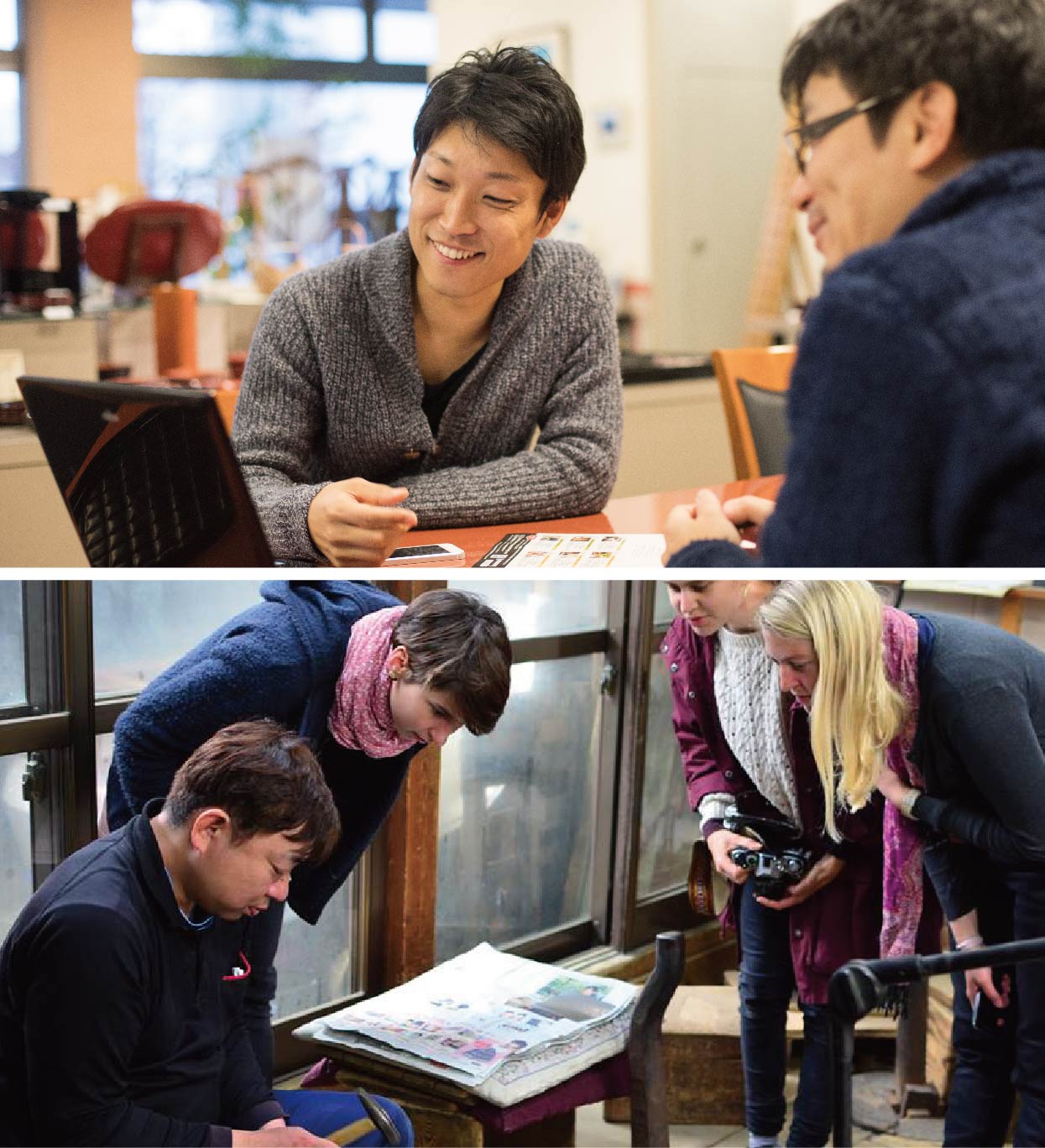 Artisans are interviewed and overseas travelers are guided around the site.

Keita Yamazaki provides a range of programming that lets travelers learn about artisans and meet interesting local people. His services aim to create a warm and inviting everyday context in which locals congregate to chat, with visitors naturally entering that space and making new and surprising discoveries. Inspired by this idea of a fun space and the traditional “irori” hearths originally found in Japanese homes, he named his organization IRORI.

Mr. Yamazaki originally hails from Tokyo. He only just moved to Takaoka in September 2015. He worked in research and consulting in Tokyo and then launched and operated an NPO hosting events for travelers from overseas. His connection to Takaoka came after searching for a place with a thriving culture of craftsmanship. Takaoka is home to many traditional crafts, and he learned that the people engaged in these industries are fascinating and charming — he was captivated by Takaoka.

“The charms of tradition and a local region can be found in the stories and passion of people there. On-site experiences are merely one way of conveying that to participants,” he says. “For example, rather than doing a copper craft workshop absent of an artisan, there is more value in speaking directly with that artisan, even if you don’t create a piece yourself hands-on. What we gain from engaging with others (passion, their stories, information, something physical, etc.) enables participants to take home with them the insights and ideas they find valuable.”

Through these encounters with other people, he wants to convey new discoveries and a sense of surprise. That goal led to the creation of a new project this year. “Toyama Table” largely targets residents of the prefecture and presents the history and culture of cuisine and craft in Takaoka and Toyama Prefecture. Each event has seen more participants joining, and it is playing a part in helping people rediscover their local region.

Seeking to cast a wider net with the idea of travel and “authentic experiences,” namely, providing more events that let people deeply appreciate the value of local traditions, he is actively enhancing IRORI. Thus far, he had largely targeted overseas travelers, but now it is seeking to, through connections with local people, forge vivid memories for all those seeking high-quality travel and on-site experiences. To that end, it is adding more partner sites and expanding its target area to further roll out new programming. Ideas gleaned from those outside the prefecture and Mr. Yamazaki’s own fresh and surprising new experiences in Takaoka and the surrounding region have created numerous exciting projects that will in turn lead to new discoveries for locals and newcomers to the area alike. 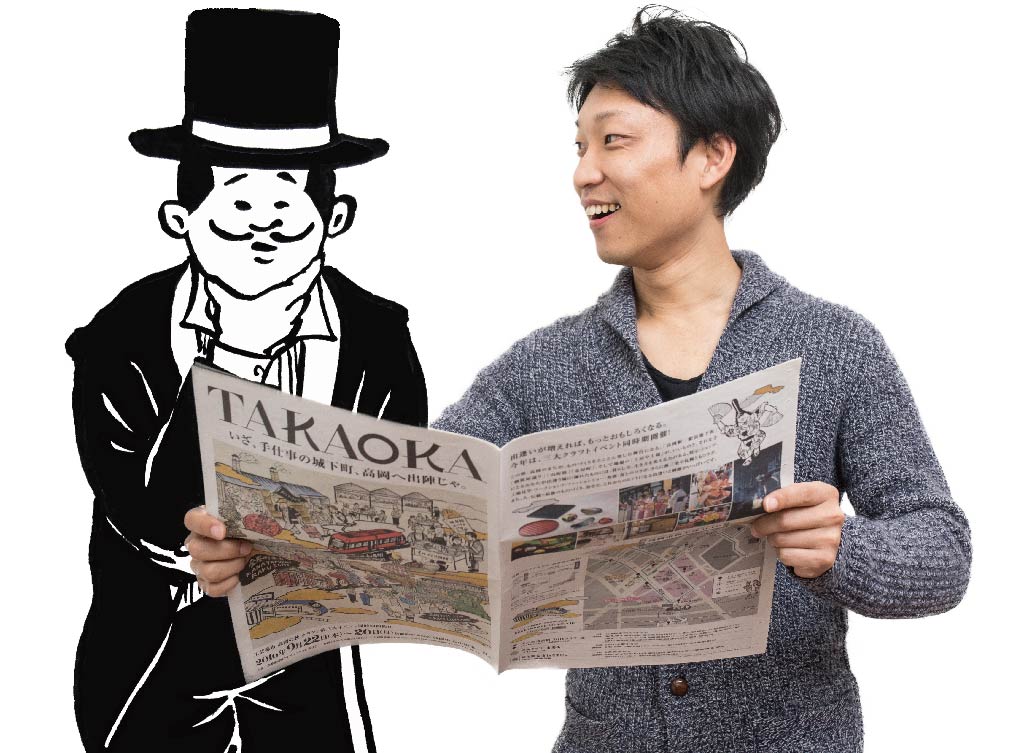 Born in Tokyo. In his student years, backpacked through Europe and the Americas, through which he learned that travel can yield new insights. After working at a company, launched an NPO that plans a wide range of workshops and events for overseas travelers to take part in Japanese agriculture and festivals. Moved to the area in September 2015 and created IRORI, a service that introduces overseas travelers to charming local residents. Since 2016, has been organizing and hosting the Toyama Table sessions with friends he has met in Toyama. The event allows local residents to “rediscover” the culture and history of cuisine and craft in Takaoka and Toyama Prefecture at large.